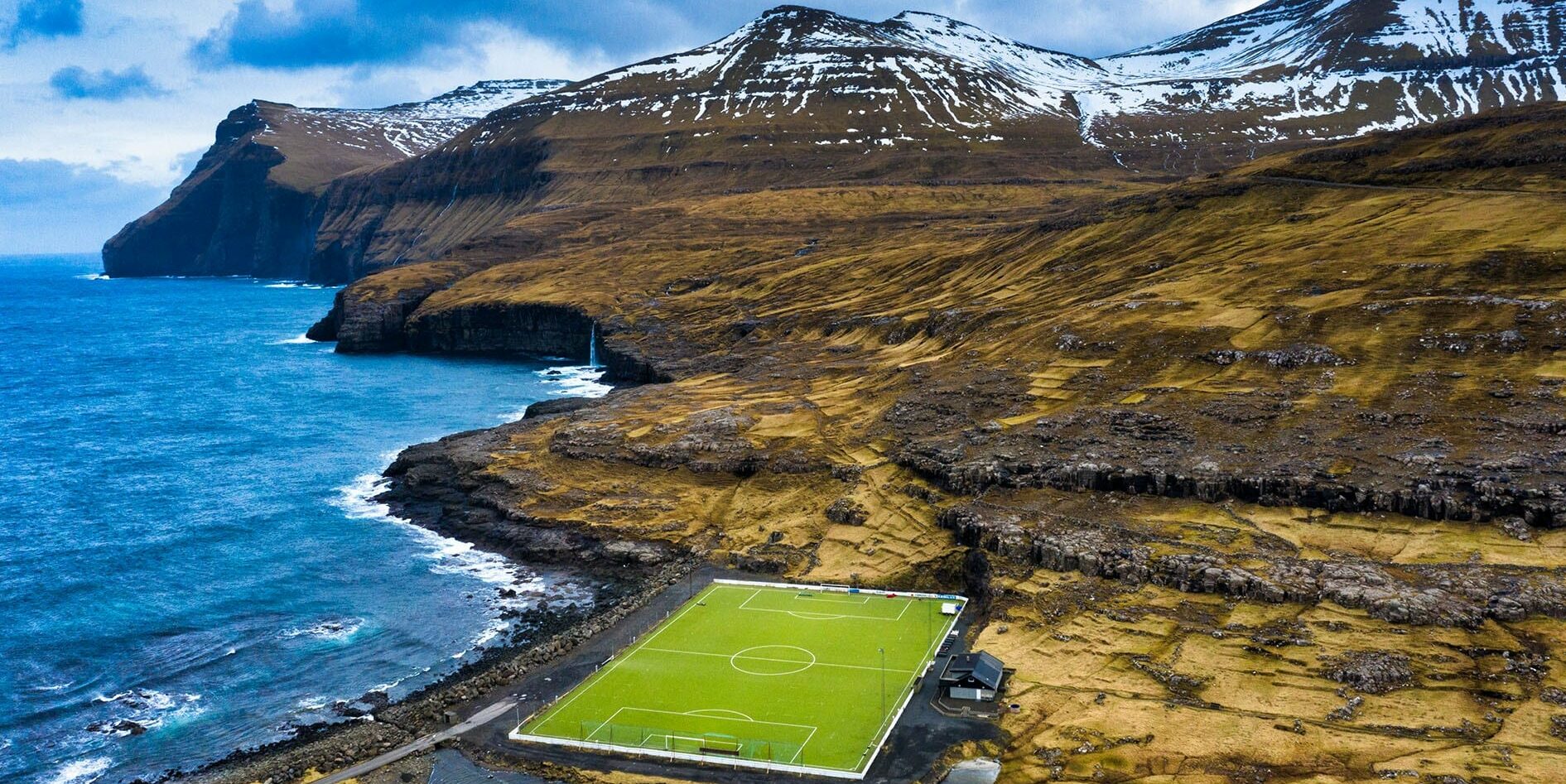 For many years Faroese football was played on rough ground. There was no organised youth training and the facilities were at best scarce. The national team only played friendlies and only got to play a national game away from home in 1962 against Iceland. Before that the national team mostly played neighbours Shetland.

​Isolated in the North Atlantic Faroese football would progress without much inspiration from foreign football. During the 70’ there are signs of organised youth football as foreign influence is making its mark.

The radio and later the TV connects the Faroe Islands to the rest of the world. Satellite TV becomes popular in the 80’ and affects the development of football in the far-flung Nordic archipelago.

In the late 1980’s Faroese football gets its biggest brake. The Faroe Islands become a full member of UEFA and FIFA.

There are concerns that Faroese football is not ready to play some of the best players in the world. Some are afraid that it may result in embarrassment.

The most important win

On September 12th 1990 the Faroe Islands played the first qualifying match in the Euro 92 qualifiers. After a number of friendlies with varying results 33-year-old Icelandic coach Páll Guðlaugsson is ready to lead 11 amateurs on the pitch in the Swedish town of Landskrona.

​The opponent is Austria who had just played at the World Cup 1990 in Italy. The Austrian team included players such as Toni Polser and Andreas Herzog.

What happened next is one of the biggest upsets in the world of international football. The Faroe Islanders will always remember that September night in 1990 when the amateurs from the Faroe Islands beat the professional football team from Austria.

​After 61 minutes of goalless football Torkil Nielsen scored the most important goal of Faroese football. The Faroe Islands hold on to the lead and win a world famous 1-0 victory.

This win has been the catalyst for everything that came later. The win was so unexpected that the Austrian manager Josef Hickersberger was fired the next day. The entire population celebrated and the players were welcomed back as heroes.

A 1-1 draw against Northern Irelands at the famous Windsor Park. The second half equaliser was headed in from electrician Kári Reynheim.

The rest of the campaign ended in losses to Yugoslavia, Austria and Northern Ireland. Back home a new home ground was built in Toftir.

Svangaskarður was to become the home ground for years to come. The football field lies on a mountain ridge on Eysturoy island.

​For the World Cup 94 qualifier the Faroe Islands welcomed some big stars. Gheorghe Hagi, Enzo Scifo and Ryan Giggs all got victories at Toftir, but the biggest star was the new national manager. Allan Simonsen is a former European player of the year at FC Barcelona and the biggest name to work in Faroese football. He is credited with making the setup more professional.

His first victory came in the Euro 96 qualifier against fellow minnows of San Marino. 3-0 at home and 3-1 in San Marino. The away game included a historical Todi Jónsson hattrick.

For the World Cup 98 qualifiers the Faroe Islands did the double against Malta. A last minute screamer from Todi Jónsson secured a 2-1 win in Malta. Two months later in front of a record crowd of 6642 at Svangaskarður the Faroe Islands won 2-1. Again, Todi Jónsson is the main source with an assist to Uni Arge, and a goal for himself.

This campaign also included two games against the mighty Spain who only conceded six goals. Three of them scored by the Faroe Islands in a 6-2 loss a Svangaskarður and a 3-1 loss in Gijón.

In the Euro 2000 campaign the Faroe Islands played some of its best football in a group without a fellow minnow. A late equaliser secured a draw against Scotland at Toftir before a draw against Bosnia-Herzegovina. Two goals from Uni Arge secured a second half lead, but a penalty miss meant a 2-2 draw after a great game of football. A goalless draw against Litava added to the tally of three points

The World Cup 2002 qualifier started with one of the most famous moments of Faroese national football. At Toftir the Faroe Islands came back from two nil down to draw 2-2 in the dying minutes of the game. The equaliser was scored by local player Øssur Hansen who proved his skills as a sublime freekick taker.

This was to be Allan Simonsen’s the last campaign. It ended with two victories against Luxembourg. A 2-1 win in Luxembourg where Todi Jónsson’s replacement Christian Høgni Jacobsen scored both goals. Todi Jónsson got injured and later retired as a result of physical complications to concentrate on club football. He later played a few more games for the national team.

The home game against Luxembourg was a game of water polo. The pitch was unplayable but the referee gave it a go. A penalty from Jens Kristian Hansen secured a victory and a new record of seven points in a qualifying group.

Allan Simonsen bowed out as a manager who had changed the setup around the national team and went on the manage Luxembourg.

​Allan Simonsen’s replacement is Euro 92 winner and top goal scorer Henrik Larsen. His first 15 minutes are some of the most enjoyable minutes of Faroese national football.

Against Scotland Jákup á Borg twice serviced club teammate and teacher John Petersen who scored on both occasions. He almost scored a hat-trick in the second half but just like the game against Bosnia-Herzegovina it ended with a 2-2 draw after a great game of football.

One of the most regrettable moments in Faroese football history came in the German town of Hannover in October of 2002. Having equalised just before halftime the Germans restored the lead in second half only for youngster Hjalgrím Elttør to hit the post in the dying minutes of the game. It could have been another famous 2-2 draw, this time against a World Cup finalist.

The return leg is played at the new national stadium in the capital of Tórshavn. At Tórsvøllur the Faroe Islands held the Germans for 88 minutes but lost out 2-0 to two goals from corners.

Henrik Larsen only lasted two campaigns. His second campaign was a disappointing one with only a draw against Cyprus to show for.

A nation in transition

In 2005 Jógvan Martin Olsen became the first Faroese national to become national manager. Faroese football was in transition as the results show.

After a year and a half of searching for the right formula, his greatest result came in the second last game of his tenure, when Austria came to visit in the World Cup 2010 qualifier. Bogi Løkin, son of Ábraham Løkin who played in the historical win against Austria in 1990, scored the Faroese goal.

In 2009 Irishman Brian Kerr became Faroese national manager. Building on the work of Jógvan Martin Olsen the Irishman added a British stamp on the team. Already in his fourth match the Faroes Islands beat Lithuania at Svangaskarður in Toftir. The focus is on physical football and every inch counts.

History has a habit of repeating itself. Almost 20 years after the famous draw in Belfast a goal from Christian Lamhauge Holst secured another 1-1 draw against Northern Ireland. This time in Toftir.

2011 is peak Brian Kerr as the Faroe Islands beat Estonia 2-0 at Toftir. A convincing victory but it spelled the end of Brian Kerr.

After a respectable start new national manager, Euro 92 Danish captain Lars Olsen, really put his stamp on the team for the Euro 2016 qualification. The signs where there but no one expected a win in Greece.

On the 14th November 2014, weeks after the national league had ended, the Faroes Islands beat Greece 1-0. Jóan Símun Edmundsson scored the only goal of the game in the second half. This is the second most important win for the Faroe Islands. But things got even better in the summer of 2015.

In front of a full house at Tórsvøllur the Faroe Islands go 2-0 up, with goals from energetic midfielder Hallur Hansson and Brandur Hendriksson Olsen – the new kid on the block – before Greece reduced to 2-1 and made it a nervy end. This has been called one of the most perfect days with sunny weather, a noisy crowed of five thousand and a convincing display of good football. This was the party everybody had been waiting for with Faroese flags all over.

​In the World Cup 2018 qualification the Faroese national team set a new record of nine points. The most impressive point came against Hungary at Tórsvøllur. It ended goalless, but the home team had most of the ball and the chances.

It was followed up with another impressive display in Latvia. The Faroe Islands made the most of a corner in the first half and rounded off a counter attack twenty minutes before time to beat Latvia 2-0. René Shaki Joensen and Jóan Símun Edmundsson scored the goals.

The good run of results made the Faroes Islands favourites against Andorra, but it proved to be two very tight contests. A frustrating goalless draw in Andorra and a tight 1-0 win at Tórsvøllur. Gilli Rólantsson scoring his first goal for the national team to write history as the Faroe Islands reached a record eight points.

The campaign was rounded off with a goalless draw against Latvia at Tórsvøllur. Nine pointes!

Lars Olsen´s last campaign gave us only one moment of celebrations. A 1-0 win at home against Malta. It spelled the end for Lars Olsen and popular captain Atli Gregersen. That was evident in the celebrations where the two were singled out by the crowed and media.

In November of 2019 the Faroese football association presented former Swedish U21 Euro winner, Håkan Ericson, as the new national manager. 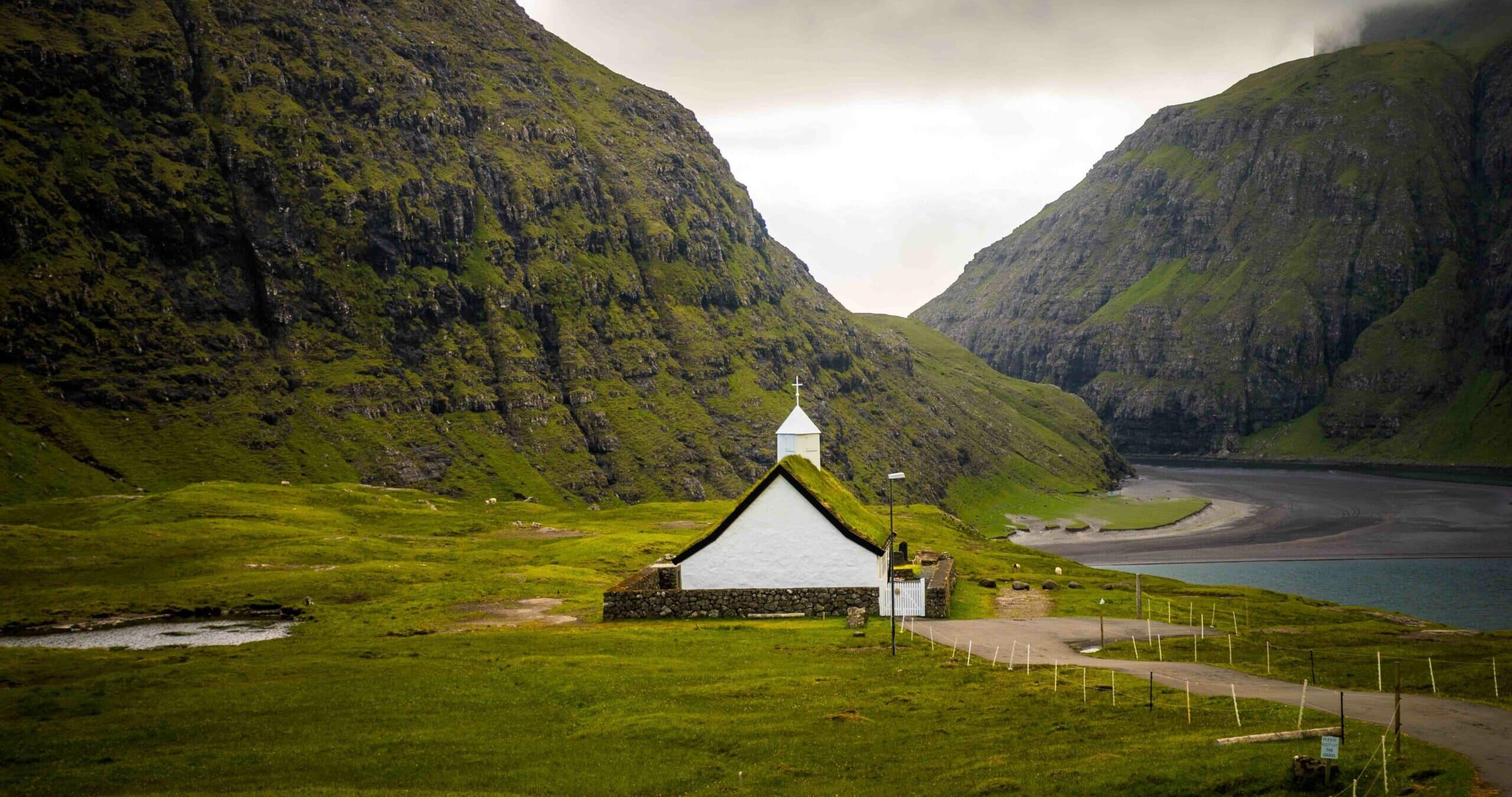 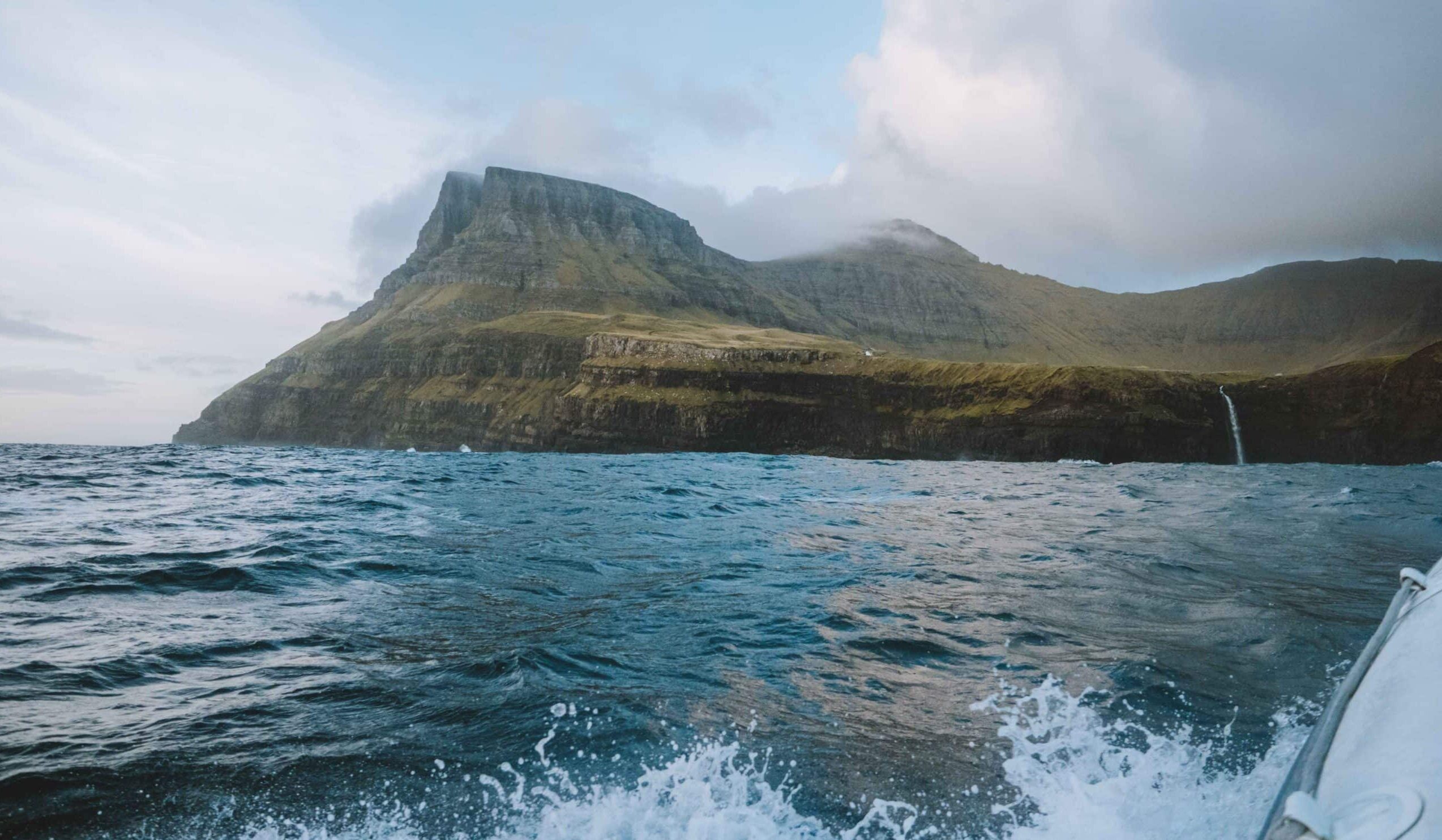 Top 13 Blogs About the Faroe Islands 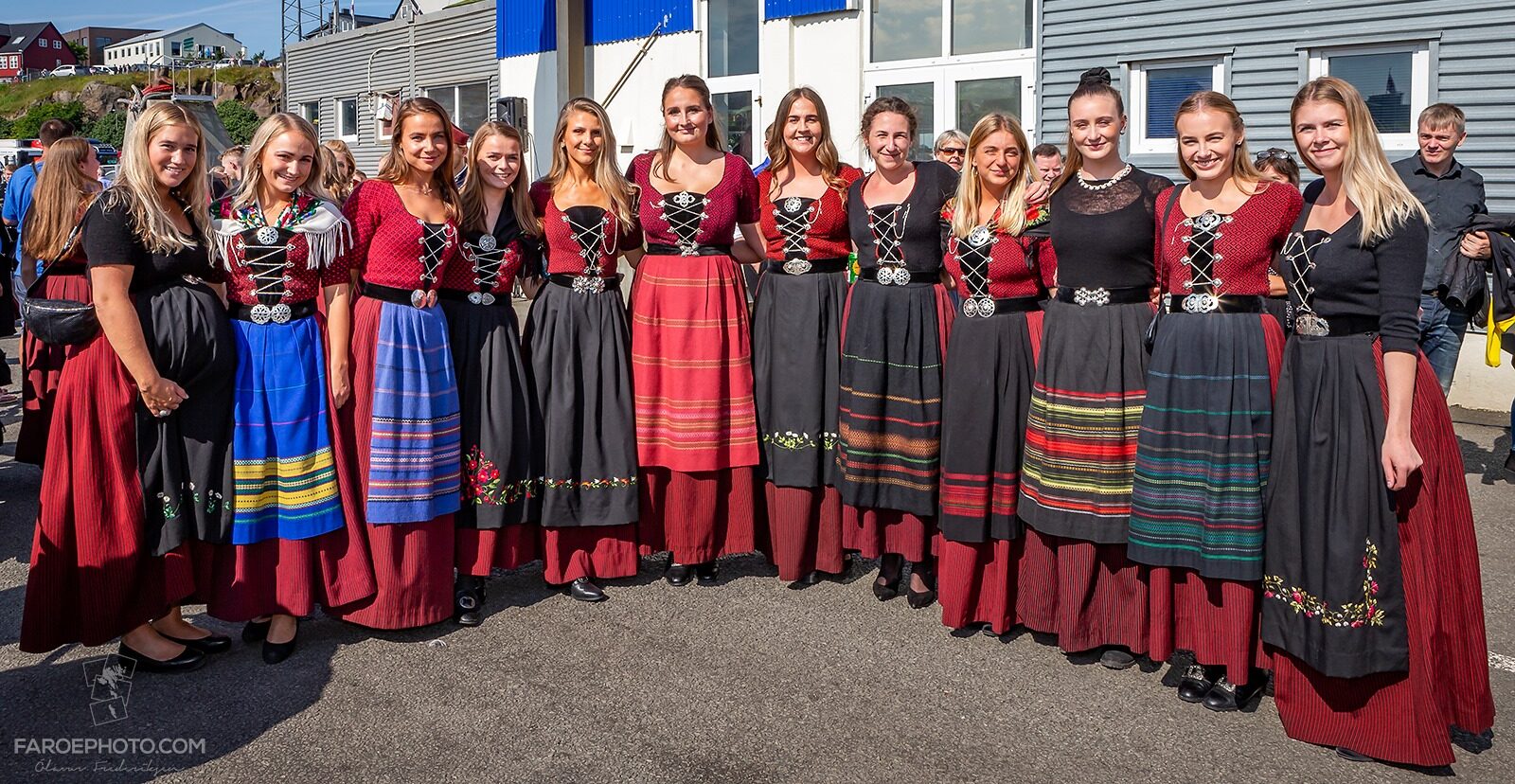 The Ultimate Guide to Eysturoy